There is good news and bad news about the effect of Ambien (Zolpidem) on the brain. The good news is that there is no scientific evidence Ambien causes brain damage. This is true if you take it for a short period, or even if you take it for a long time. The bad news is that Ambien can do some strange things to the brain while you are taking it. None of these effects are permanent, but they are important and worth understanding.

Ambien is classified as a hypnotic drug. This simply means it causes you to fall asleep. It is most often prescribed for the treatment of insomnia. Ambien works by binding to receptors in the brain that help switch off consciousness. While the drug is very good at getting people to fall asleep, it does not help people stay asleep. When these people wake up, some odd and disturbing side-effects can occur.

The day after taking Ambien people report difficulty remembering things and performing complex tasks. These effects tend to wear off in a few hours. The brief nature of these side effects suggests the drug does not do permanent damage to the brain.

The next-day effects of Ambien make the drug more dangerous for frail elderly people who are at risk of falling. Apart from the risk of falls, Ambien is generally considered safe for the elderly. 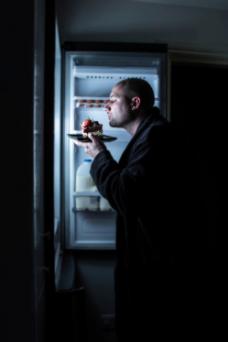 Ambien appears to disrupt the natural rhythm of sleep. Humans cycle between deep and light sleep several times during the night. Ambien pushes the brain into deep sleep more quickly than normal. Then, when the brain tries to cycle into shallow sleep or wakefulness, it doesn't quite get there, leaving the sleeper suspended somewhere between sleep and wakefulness.

This altered state of consciousness can cause people to engage in some very odd behaviors. Some of these behaviors, called parasomnias, are well known, others are less so. Sleepwalking, sleep eating, and even sleep sex have been reported. The feature that ties all these behaviors together is that the individual has no memory of the event after the fact. This is known as "anterograde amnesia," meaning the person forgets events that happen after taking the drug for some time. The most dangerous behaviors are done by people who get in their cars and try to drive while on Ambien. The driver may appear awake, but his brain is still in the Ambien-induced state.

Ambien Might Harm the Brain While You Are Taking It

The following effects have been noted with Ambien use:

Ambien is a safe and effective treatment for insomnia, but only when it is taken as directed, in relatively small doses, and for brief periods of time. Most physicians recommend using Ambien for only a few weeks at most. During this time, experts recommend treating the underlying causes of insomnia. Ambien is an effective temporizing measure, a tool to get the insomniac some desperately needed sleep until the cause of his insomnia can be diagnosed and treated. During treatment, Ambien users should pay close attention to side effects and alert their physicians immediately if any occur.