While many studies note that relaxing music creates a better, more sound sleep, multiple studies now show that any type of music that is paired with a relaxation exercise can improve sleep hygiene and quality. Discover how to use music and what choices are best to get a better night's rest.

Music can have a profound impact on sleep. From creating a relaxing atmosphere to impacting neurotransmitters, music can be an incredibly powerful tool when it comes to getting a solid night of sleep.

Binaural beats work by sending two tones of different frequencies to each ear using headphones. A study was conducted on athletes who listened to binaural beats while they slept for eight weeks. After the eight weeks, they reported improved sleep quality as well as daytime functioning. This study suggests that this meditative music can potentially have significant long-term benefits as well.

In a study of adults ages 60 to 83 years old, participants were given the option to listen to 45 minutes of relaxing American or Chinese music. Over a three-week period, participants reported better sleep quality, less sleep disturbance, and sleeping for a longer period of time. The results were cumulative and continued improving over the three-week period, suggesting that sleep habits and quality can be tweaked for the better if a consistent routine is set up.

Your Choice of Music Paired with Relaxation Exercise 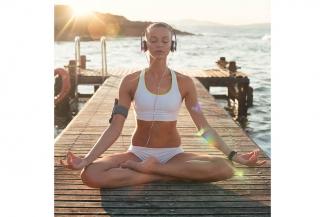 A study conducted at two domestic violence shelters looked at the impact music paired with progressive muscle relaxation has on those who reported not getting good, restorative sleeps. They found that regardless of the music selected, as long as it was paired with progressive muscle relaxation, the participants reported getting better slumbers and showed a reduction in anxiety symptoms.

According to Forbes, the song Weightless by Marconi Union has been dubbed the most relaxing song in the world. Neuroscientists from Mindlab International conducted a study with the song and found it reduced anxiety in its subjects by 65 percent. Sound therapists explain that part of the reason it is so soothing is that it uses sustained rhythms that gradually go from 60 to 50 beats per minute.

How Music Impacts the Brain

Music releases dopamine, a neurotransmitter that causes a pleasurable feeling when released. This can lead to positive feelings, relaxation, and overall contentness which can result in a better night of sleep.

There are tons of free and subscription services to choose from when it comes to great music playlists. While subscription services allow you more freedom in creating a relaxing playlist, free services offer great pre-made soothing sound and decompression playlists. Along with classical music, music with binaural beats, and music with chants, you'll find other music styles likely to assist with sleep, such as instrumentals and nature sounds.

Youtube offers a huge selection of free relaxation playlists and ambient sounds. Some of their most popular include:

You can use Spotify for free, but there will be ads, otherwise you can pay around 10 dollars a month to enjoy it ad free. With Spotify you can create your own playlist, or listen to a pre-made one. Some meditative playlists include:

The Power of Music

Research repeatedly notes that music can create positive physical and mental effects on individuals. Experiment with different playlists and music to see which ones help you fall asleep and get the best sleep possible.